Crunching vast tracts of data is a growing task for defense, intelligence and security agencies.

They need analysis, fast, of what’s going on in the air and on the ground to assess battlefields, secure environments, and decide when and how to deploy people or humanitarian aid.

Artificial intelligence may be the key to digesting the barrage of data from multiple sources.

To unlock insights from this data, agencies are increasingly turning to GPU-powered deep learning, with algorithms that can identify relevant content and patterns in raw data at machine speed.

GPUs: The Engine of Modern AI

The event is hosted by the U.S Geospatial Intelligence Foundation, a nonprofit group promoting geospatial intelligence (GEOINT) work, such as mapping and charting. Deep Learning to the Rescue

Using a deep learning approach means leveraging massive volumes of training images in which different classes of objects, for example, cars or buildings, are labeled.

These are used to train an artificial neural network to detect objects with high precision in new examples of images it’s never seen before.

With billions of trainable parameters to work from, the identification accuracy rate soared to more than 95 percent in the past year, from closer to 70 percent in 2010, Barker said.

In 2015, Microsoft researchers achieved record results on ImageNet, a prestigious image-recognition benchmark, thanks to the use of GPUs.

The breakthrough comes amidst an artificial intelligence renaissance sparked by the use of GPUs to create powerful neural networks.

GPUs also offer something else — speed. For defense groups, there’s no time to waste. 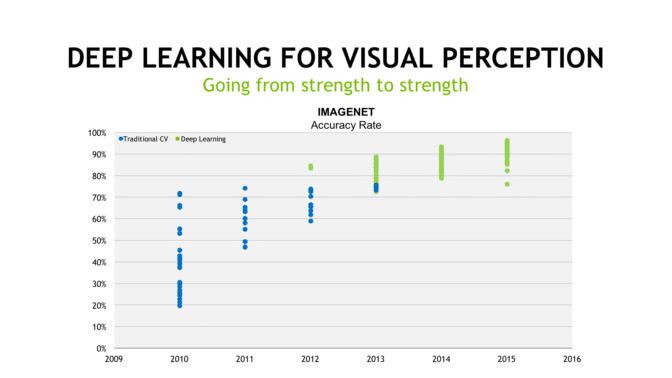 A server powered by four NVIDIA Tesla M40 GPU accelerators cuts training time on AlexNet on the ImageNet dataset to one day, compared with nearly two weeks on a dual-CPU server.

GPU architecture is also adaptable enough to apply to the myriad scenarios these groups face.

With open-source tools and libraries, such as cuDNN, available to help custom-design resources, the first line of defense can be plotted out on tight timelines, within strict budgets and using predictive outcomes — long before any boots are on the ground.

To hear more about ‘Recent advances in  Deep Learning for Defense,’ watch the recording of our recent webinar, here.