Raising the Bar on Performance

The improvements come in part from the impact of the Citrix software graphics process (CTXGFX.exe) offloaded from CPU to NVENC.  Our testing reveals a dramatic increase to host scalability by 30%, based on 22% less VM memory usage and 93% less VM CPU usage – all accomplished without impacting performance. 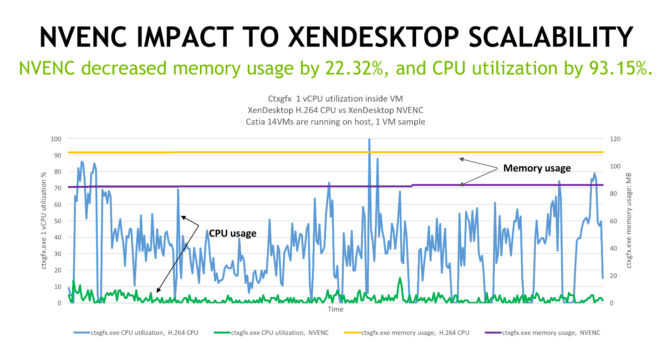 So now you can turn the “knobs” on your infrastructure to meet your desired goal: delivering an upgraded experience to your existing end users or adding even more users without taking a hit on performance. You get twice the bang for the buck: XenDesktop performance, and host scalability.

End users will also see a dramatic improvement to perceived latency.  Our internal testing showed a consistent 55ms of latency reduction in XenDesktop 7.11 when compared with 7.8. This is the difference between a virtual desktop or app that feels “spongy” versus one that feels “snappy,” like you would expect with a local, physical PC experience.

Unlike many optimizations that force trade-offs in other design considerations, NVENC offers its benefits with no such compromise.  Latency improvement offers users better experience or they can use the performance gain to extend their distance from data center, working further away (think global offshoring scenarios, distributed teams, etc.). Offloading from CPU to GPU allows IT administrators to increase density without sacrificing performance or to offer more performance at the density they have today.

Extending the Scale and Reach of XenDesktop 7.11

Citrix XenDesktop 7.11, combined with our NVIDIA Tesla M10 GPU and NVIDIA GRID software, delivers the ability to host up to 128 users in a typical 2U server, without sacrificing performance or user experience. Organizations can now deliver and manage superior, native-like user experience to all user types from designers to office workers.

With the latest NVIDIA GRID August 2016 Release, Citrix users also get NVIDIA GRID Monitoring.  NVIDIA GRID Monitoring provides IT with new visibility into their environment and allows them to intelligently design, manage, and support their end user’s experience, ensuring delivery of native-like virtual desktops from the data center with enterprise-grade manageability.