Keeping up with the massive flow of research data on breast cancer is a challenge for scientists. And the variety of methods used to analyze that data make reliable predictions difficult to come by.

The team’s results were dramatic, dropping the human error rate in diagnosis by 85% when aiding a pathologist’s efforts with GPU-powered deep learning analysis.

Led by Andrew Beck, associate professor of pathology and director of bioinformatics at BIDMC’s Cancer Research Institute, the team looked into the latest advances in artificial intelligence to help pathologists with their overwhelming tasks.

“The goal was to build a computational system to assist in the identification of metastatic areas of cancer in lymph nodes,” says Beck. “Our guiding hypothesis has been that pathologists working with computers will outperform pathologists operating alone.”

For this project, the team used NVIDIA Tesla K80 GPUs with the cuDNN-accelerated Caffe deep learning framework, which Beck said significantly sped up the process of training their computational models.

Researchers extracted millions of small sections of images that had been labeled either as cancer or normal. They then used those examples to train their models to find the probability that a patch contains cancer, eventually creating tumor probability heatmaps.

The results were impressive, as the team’s system successfully identified cancer 92 percent of the time. While that didn’t match the 96 percent success rate of human pathologists, it was enough to claim the top prize in two separate categories at the Camelyon Grand Challenge.

It also validated the team’s hypothesis: human analysis combined with deep learning results achieved a 99.5 percent success rate. This shows pathologist performance can be improved when paired with AI systems, signaling an important advance in identifying and treating cancer.

The team has continued to improve its algorithms, and its most recent entry achieved a 97.1% accuracy on the evaluation set, surpassing the pathologist’s performance. 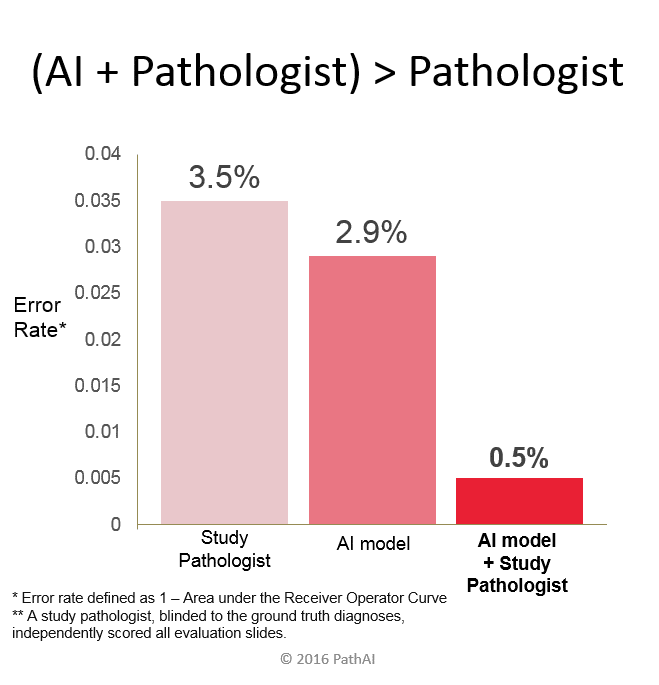 Motivated by their success, Beck and colleagues have formed a startup, called PathAI, focused on the development and application of AI for improved diagnostics.

“The implications of this work are large, suggesting that in the future we’ll see more examples of AI being used with traditional pathology to make diagnoses more accurate, standardized and predictive,” Beck said.

Read more about the accomplishments of Beck and his team by checking out their published paper.