Just over 10 years ago accelerated applications didn’t exist. Today, almost 600 are accelerated by NVIDIA GPUs. The reason: GPU acceleration works. And that’s why it’s been put to work on the hardest computing jobs on earth.

These are apps that get work done in physics, bioscience, molecular dynamics, chemistry and weather forecasting. The world’s 15 most popular HPC applications are all GPU accelerated. In the last year, we’ve added more than 100 applications to our NVIDIA GPU Applications Catalog. More are coming. A report by Intersect 360 research identified the key applications running in the data center. All the top 15 apps were GPU accelerated. It’s a murderer’s row of hard-core science apps. They include:

These tools don’t get incremental performance gains. GPU acceleration changes the economics of the data center. Servers with NVIDIA GPUs typically speed up the application performance by 10x or more.

And since the application performance does not scale linearly with the number of CPU servers, each GPU-accelerated server provides the performance of even more CPU servers than what just the speed-ups would imply. So you can meet the growing demand for computing — and save money. 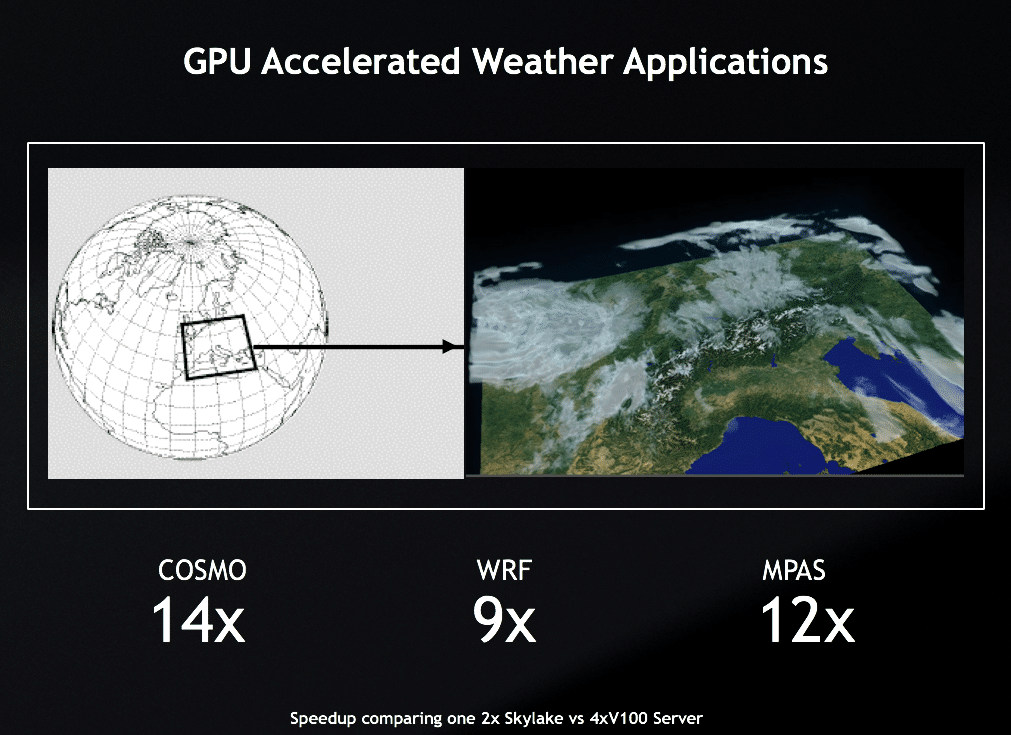 Weather prediction looks hard. And it might be even harder than it looks. No surprise, then, that weather prediction is a big piece of HPC. Important, too. Reliable weather forecasts save lives. They also drive economic decisions in aviation, energy and utilities, insurance, retail and other industries.

But weather prediction requires massive computing resources. Two reasons: geometric scale (especially for global weather predictions), and the enormous number of variables that describe the state of the atmosphere.

Today weather prediction is limited by the amount of computing and application performance available. So today’s models are limited to low-resolution simulations, such as 12-km resolution.

But that leaves out important details, such as the impact of clouds, which play an important role in weather patterns by reflecting solar radiation. Going to 1-km cloud-resolving resolution can improve forecasting. But it requires 1,700x more application performance.

GPU acceleration can heft weather forecasts over that gap.

Takeaway: the performance on GPUs scales very well to enable efficient computation of the largest and the most complex simulations. NASA has shown that a thousand GPU servers on Summit supercomputer can do the work of over a million CPU cores. And for a fraction of the energy costs. 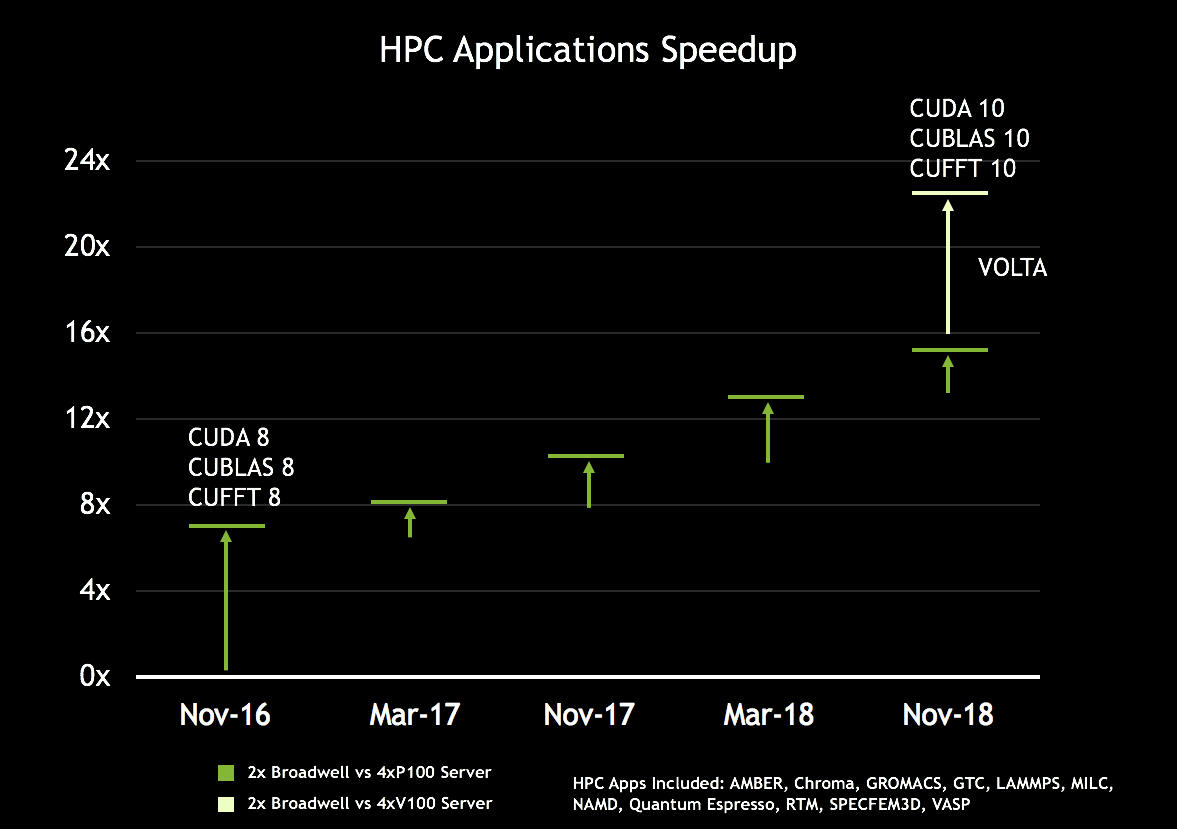 We have deep expertise in all accelerated computing domains. Combined with an ecosystem of more than 1 million developers, this results in a platform that’s constantly improving. This provides higher application performance over time on the same GPU-accelerated servers.

For instance, on a basket of 11 HPC applications, a server with 4 NVIDIA Tesla P100 GPUs now runs 2x faster compared to its performance from two years ago. Pair improvements in the software stack and GPU architecture advancements and you get even bigger performance gains.

With a single platform, you can now accelerate applications across a variety of HPC domains — scientific computing, industrial simulations, deep learning and machine learning. The harder the job, the bigger the payoff. So go ahead and accomplish wonders — or get your work done fast enough to see your kids — with GPU-accelerated applications.

To see the full list of GPU-accelerated applications, check out the NVIDIA GPU Applications Catalog.