Previously limited to CPU-only, AI workloads can now be easily deployed on virtualized environments like VMware vSphere with new vComputeServer software and NVIDIA NGC. Through our partnership with VMware, this architecture will help organizations to seamlessly migrate AI workloads on GPUs between customer data centers and VMware Cloud on AWS.

vComputeServer gives data center administrators the option to run AI workloads on GPU servers in virtualized environments for improved security, utilization and manageability. IT administrators can use hypervisor virtualization tools like VMware vSphere, including vCenter and vMotion, to manage all their data center applications, including AI applications running on NVIDIA GPUs.

Many companies deploy GPUs in the data center, but GPU-accelerated workloads such as AI training and inferencing run on bare metal. These GPU servers are often isolated, with the need to be managed separately. This limits utilization and flexibility. 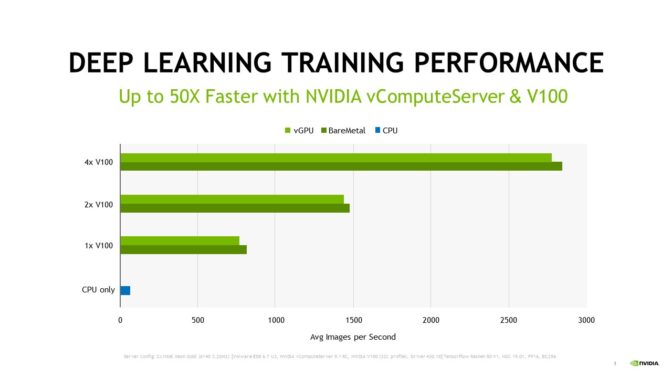 Today’s announcement brings support to VMware vSphere along with existing support for KVM-based hypervisors including Red Hat and Nutanix. This allows admins to use the same management tools for their GPU clusters as they do for the rest of their data center.

NVIDIA vComputerServer provides features like GPU sharing, so multiple virtual machines can be powered by a single GPU, and GPU aggregation, so one or multiple GPUs can power a virtual machine. This results in maximized utilization and affordability.

RAPIDS offers a range of open-source libraries to accelerate the entire data science pipeline, including data loading, ETL, model training and inference. This enables data scientists to get their work done more quickly and significantly expands the type of models they’re able to create.

All NGC software can be deployed on virtualized environments like VMware vSphere with vComputeServer.

IT administrators can use hypervisor virtualization tools like VMware vSphere to manage all their NGC containers in VMs running on NVIDIA GPUs.

Leading industry partners have shown support for NVIDIA vComputeServer, including Dell, Cisco and VMware, among others. Read what they have to say.