We’re kicking off a frenzied week at the International CES tradeshow in Las Vegas with a press conference tonight at 8pm PT at the MGM Grand on the Vegas strip.

So stay tuned to our live video feed and our Twitter feed — and refresh this page as we drop links to all of tonight’s announcements — as well as color and quotes from tonight’s event. Latest updates are at the bottom of the page.

The media has been let inside for the @nvidia CES 2019 press conference. Can’t wait to find out what will be Unveiled! Be sure to watch the live stream. #CES2019 #GeForce #Nvidia pic.twitter.com/iRN7YKVwEz

NVIDIA CEO Jensen Huang takes the stage, sporting his trademark leather jacket and beaming smile, welcoming the crowd to Sunday night’s event. The company traditionally kicks off CES with this Sunday evening slot and he’s clearly right at home, before a standing room only room of close to a thousand editors, journalists, analysts, partners and gaming fans. Tonight, Huang declares, will be all about gaming.

It’s going to be a mostly gaming chat at NVIDIA’s CES event. NVIDIA’s CEO Jensen Huang is going over how much GPUs transformed gaming pic.twitter.com/ydhzQcZrPc 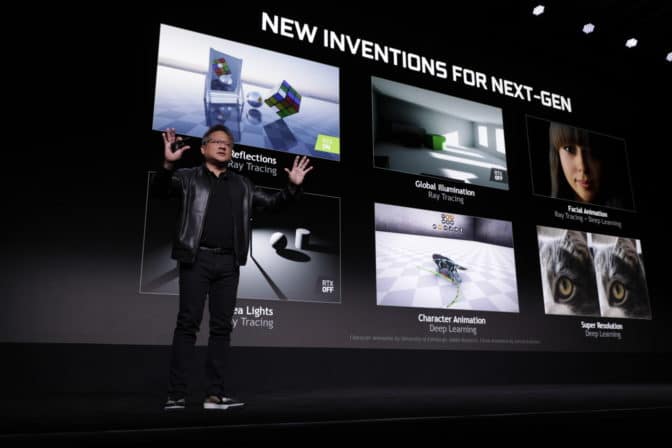 And so he begins, talking about how far real-time gaming graphics has come in the past 15 years. But for all that, games still come across as something like cartoons.

That changed, he said, in August with the introduction of NVDIA RTX next-gen graphics, built on Turing, NVIDIA’s latest GPU architecture.

It represents the biggest shift in real-time graphics since NVIDIA invented the programmable shader at the start of the previous decade.

8:29 – Turing, he notes, is the largest single technical leap the company’s ever made in a single generation.

After laying out this context, Huang gleams for a moment, and launches a new demo.

If you’ve tuned into any of our recent events, you know the first part of the tale, depicting a futuristic hero who dons space-age armor, rendered in stunning detail, thanks to real-time ray tracing.

This demo, though, has a twist. Our hero launches himself into the sky, before sticking a suitably heroic landing. And then he gets stuck. We won’t spoil the ending, but we’ll be posting the full video after the event. The takeaway: real-time ray tracing makes real-time cinematic graphics possible.

8:36 – And the demos keep  coming: Huang gives the audience a peak at a few of the many more that are coming, such as Atomic Heart, a stunning, atmospheric adventure from Mundfish. The message: RTX is beautiful and fast. 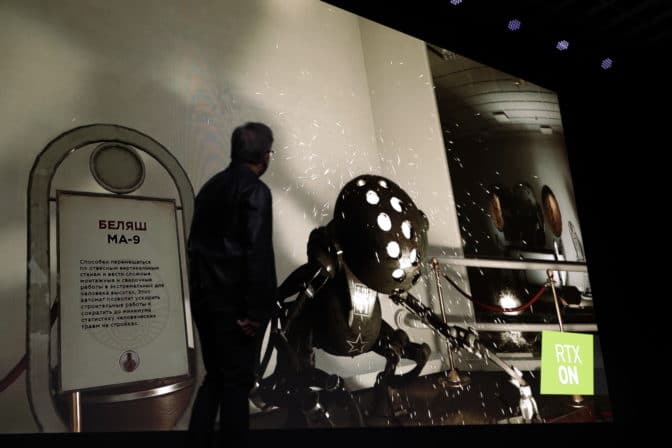 RTX’s ray-tracing capabilities, Huang explains, are supported by a broad array of partners, from Microsoft to Unreal Engine and Unity to Frostbite, the game studio behind Battlefield V. That masterpiece, launched in November, is already a showcase for RTX’s capabilities.

8:43 – But ray tracing is only part of the story. NVIDIA’s Turing architecture also incorporates Tensor Cores, which enable sophisticated deep learning algorithms. The result is a technique called DLSS — Deep Learning Super Sampling — which uses AI to train sophisticated algorithms that optimize the graphics for gaming.

“It learns from great content what it should look like,” he said. “Then, one day, we give it an image and it goes through a network called DLSS and what comes out of it is a beautiful image. This is the neural network we created to improve an image.”

To show this in action, he rolled a stunning video of Anthem, available Feb. 15, a fast-paced game set in a sprawling open world from BioWare, the acclaimed Canadian studio behind the Dragon Age and Mass Effect franchises.

8:52 – To show DLSS in action, Huang  shares another demo that shows two versions of the same scene playing at super high-res 1440p. One uses ray tracing  with TAA — temporal anti aliasing; another uses ray tracing with DLSS, which makes the image go faster, with higher resolution. A quick run through of the demo, which shows a silvery spaceship docking in an otherworldly space port, shows how Turing’s ray tracing and deep learning capabilities can generate scenes that are more richly detailed and smoother.

Now, we see a demo of Justice, a game for the China market. It features rendering done to a level of super photo realism, with real-time caustics, with shadows rippling over water. Next we see the world of the game reflected in a gem embedded in the hilt of a dagger flying through the air.

9:04 – Next: A demo of Battlefield V, shows stunning reflections and refractions at play in a detailed reproduction of war-torn Rotterdam, in Holland. Shadows reflect differently with extraordinary realism in rippling canals, in dirty windows, in stagnant puddles, even on the shiny surfaces of a World War II era tank. The ultimate show comes from a powerful V1 rocket that levels a building with shocking verisimilitude.

The thing that’s really amazing is you saw the entire demo running with RTX On at 1440p on a brand new GPU. And it’s the first news of the show: the GeForce RTX 2060. “The long awaited RTX 2060 is here,” he said.

Experience next generation gaming for only $349 when it releases on January 15th. #RTXItsOn #CES2019 pic.twitter.com/fDMVLngZWC

RTX 2060 will be available beginning Jan. 15 — for just $349. It’s based on the Turing architecture, bringing high-end graphics to tens of millions of gamers worldwide.

The new card is the ideal upgrade, Huang explains, as games get more demanding and gamers look to trade up to the latest generation of graphics technology. It delivers 52T Tensor flops, 5 Gigarays per second and 6GB of G6 memory. 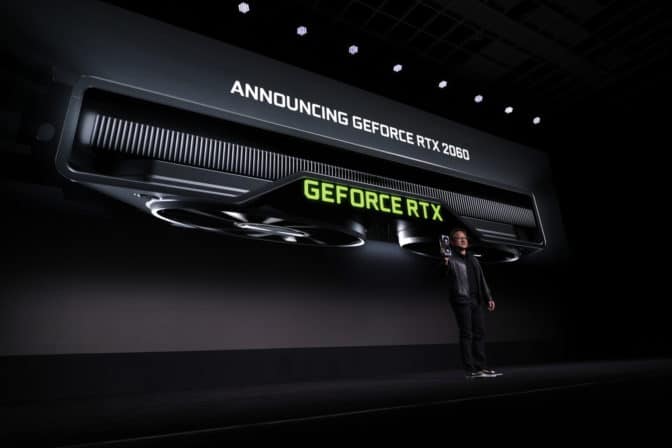 You can read the press release, which has just crossed the wire, for all the details.

9:12 – “For $349 you can enjoy next generation gaming,” Huang says to broad hoots from the audience. 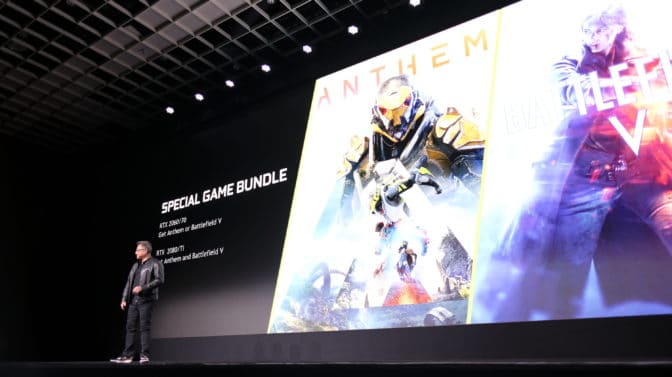 NVIDIA continues to push forward the state of the art for gaming displays, Huang says. Launched in 2013, G-SYNC introduced gamers to smooth variable refresh rate gameplay, with no screen tearing and no V-sync input lag. It’s the pinnacle of gaming monitor technology.

“These are utterly beautiful monitors and they’re all silky smooth,” he said. “This is a monitor built to the ultimate specification.”

We’re going to test every A-Sync monitor the world has ever made and certify those that pass our tests. We’ve already tested 400 and only a dozen have passed, making them functional for gamers. We’ll continue to test more than 100 others. 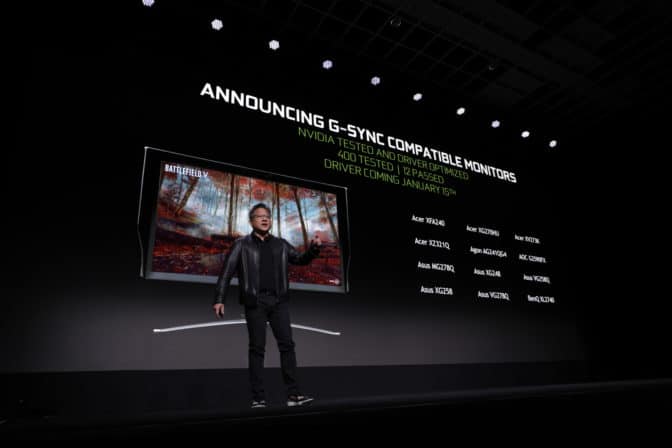 We’ve published a blog post with many of the high-level details. For more, go to GeForce.com, where we’ll go more in-depth on this later tonight.

Huang notes that gamers do more than just play games with our GPUs. There are 8 million people who broadcast games, many using OBS, the world standard for coding and streaming. And there are many who use VR. And content creation, too.

As a result, Huang announced that RTX will be able to use Autodesk Arnold for interactive rendering. RTX will be able to be used to do 8K RED video editing. And we’re partners with OBS on pro-quality broadcast streaming on a single PC, rather than the two that are currently required. RTX can also be used for high-end VR — with VirtualLink — a single wire that connects the GPU to the head mounted display — and other features with HTC, which the company will announce later at CES. 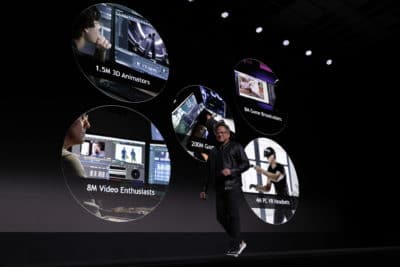 9:30 – Huang also announces that more than 40 RTX laptop models in more than 100 SKUs will be coming to market by month’s end, featuring GeForce RTX 2080, RTX 2070 and RTX 2060 GPUs. Seventeen of these are Max-Q laptops, enabling the world’s thinnest, fastest, best performing systems. With Max-Q, systems can under 20 mm thin, weighing under five pounds, with 3x the performance of the previous generation.

Check out our press release on our newsroom for all the details.

He shows Ansel on Justice, where the demo shows how filters can be applied in a variety of modes, a painterly mode, a watercolor mode. And he shows gorgeous shots taken of Battlefield V, which have been taken by gamers, posted on NVIDIA’s website and then displayed on massive high-def video billboards  on New York’s Times Square.

In closing, Huang recounts the news, led by the launch of RTX 2060, available Jan. 15, at an amazing price of $345, with higher performance than GTX 1070 Ti, which runs Battlefield V with RTX On at 1440p. He also cites the launch of 40+ RTX laptops, available from nearly every computer maker in the world — with 17 of them Max-Q.

As Huang prepares to leave the stage, he smiles and confidently states “RTX is here, next gen is on.”

That’s it for our press conference — but we’ll be bringing more details on all these announcements over the coming days.

Check our YouTube channel later this week for a video recap of tonight’s keynote.

Gamer? Go to GeForce.com for a deeper dive on all these announcements.

At the show? Stop by our booth.