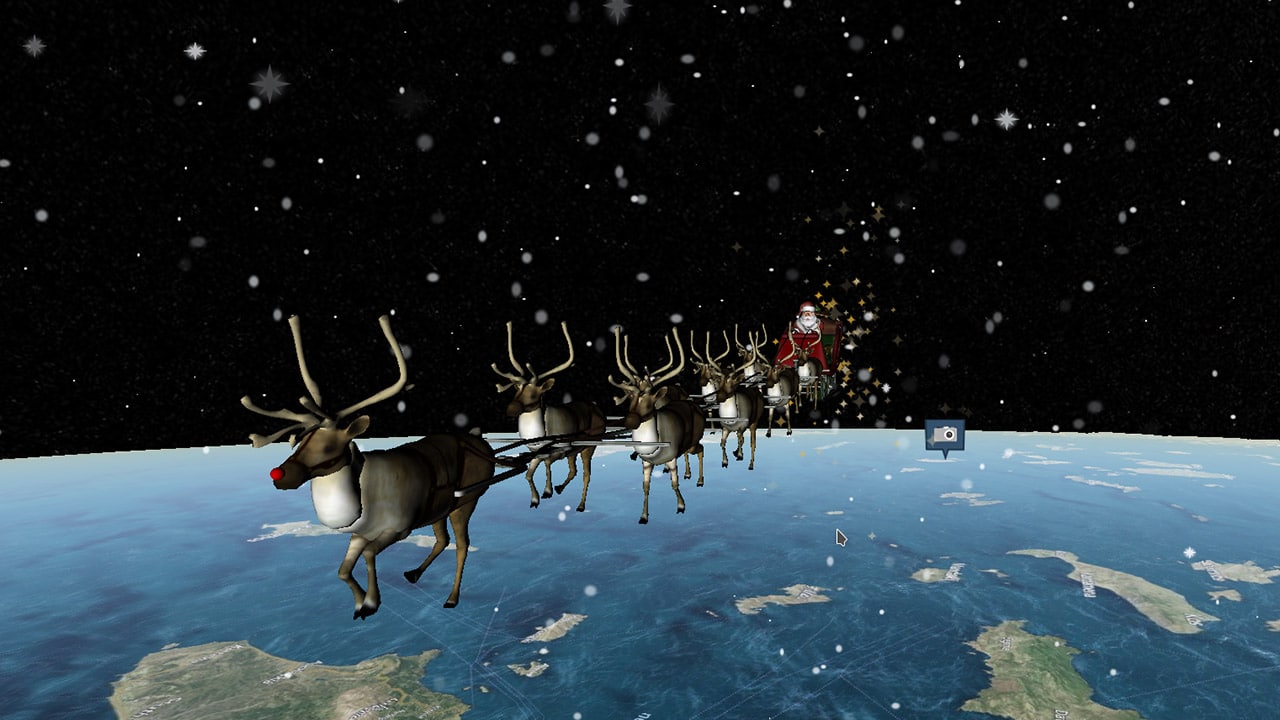 Santa Claus is comin’ to town … and thanks to the NORAD Santa Tracker, you and your kids can find out exactly when no matter where you are in the world.

NORAD — the North American Aerospace Defense Command — diligently monitors the skies year-round for missiles, planes and other airborne objects. On Christmas Eve that includes Saint Nick, whose sleigh it tracks from the moment it lifts off.

Originally a part of Exton, Pa., firm Analytical Graphics, Cesium maintains an open-source WebGL globe and map engine widely used for visualizing fast-changing data — and has worked with NORAD since 1997 on the effort.

When paired with the latest internet browsers, WebGL can take advantage of powerful NVIDIA GPUs to render images based on NORAD’s real-time data in stunning detail.

NORAD began tracking Santa in 1955, when a newspaper ad misprinted a call-in number for Santa. Instead of Santa, callers reached the operations hotline at the Continental Air Defense Command Air Operations Center – the predecessor to NORAD – in Colorado Springs, Colo.

When the phone started ringing, Colonel Harry Shoup, then director of operations, had his staff use CONAD’s network of powerful radar installations to track, and report on, Santa’s progress to children calling the number.

Today, NORAD shares this critical information through the web, a dedicated mobile app, and social media. More than 1,400 staffers run the hotline, which receives around 150,000 calls each year.

The NORAD Santa tracker page has more than 1.8 million followers on Facebook. For live updates of Santa’s location throughout Christmas Eve, there’s also the @NoradSanta Twitter handle and YouTube channel.

How to Find the NORAD Santa Tracker

The Santa Tracker webpage lets children explore the North Pole all through December. But on Christmas Eve, as soon as Santa’s sleigh takes flight, site visitors can find live updates on his location and footage from Santa cams stationed around the world.

Kids should be in bed by 10 p.m. so they’re asleep by the time Santa arrives, recommends Hannah Pinkos, software developer at Cesium.

“It’s really fun that the app that I work on gets visited by millions of children,” she said. “I would have loved this when I was growing up, to be able to watch Santa in 3D.”

The footage of Santa’s travels has gotten several upgrades over the years, most recently with a particle system that lets viewers see snow and sparkles trail behind a 3D animated model of Santa as he flies across the globe.

This year, the sparkles and snowflakes will be visible on both the desktop and mobile versions of the site.

The NORAD Santa Tracker draws more than 20 million visitors each Dec. 24 who can now zoom up close as Santa soars over vast mountain ranges and swoops through city streets.

NORAD’s efforts over the past six decades have yielded new insights into this centuries-old phenomenon.

Typically, Santa begins his journey in the South Pacific. Then, as night falls, he travels to Australia and New Zealand, before continuing west. Data also shows he likely has rosy cheeks from riding his sleigh in cold weather, and weighs about 260 pounds (before milk and cookies).

Most identify Santa with the 4th century Christian saint Nikolaos of Myra — known as Nikolaos the Wonderworker — renowned for his secret gift giving. Others see in his nocturnal yule-time journey echoes of ancient tales of the Norse god Odin and his eight-legged horse, Sleipnir.

Whatever his origins, thanks to NORAD’s efforts children and their parents from around the world can keep a close eye on Santa on Christmas Eve, just as he does with us year-round.