By day, Alain Paillou is the head of water quality for the Bourgogne region of France. But when the stars come out, he indulges his other passions.

Paillou takes exquisitely crisp pictures of the moon, stars and planets — a hobby that combines his lifelong love of astronomy and technology.

Earlier this year, he chronicled on an NVIDIA forum his work building what he calls SkyNano, a GPU-powered camera to take detailed images of the night sky using NVIDIA’s Jetson Nano.

“I’ve been interested in astronomy from about eight or 10 years old, but I had to quit my studies for more than 30 years because of my job as an aerospace software engineer,” said Paillou in an interview from his home in Dijon.

Paillou went back to school in his early 30s to get a degree and eventually a job as a hydrogeologist. “I came back to astronomy after my career change 20 years ago when I lived in Paris, where I started taking photographs of the moon, Jupiter and Saturn,” he said.

“I really love technology and astronomy needs technical competence,” he said. “It lets me return to some of the skills of my first job — developing software to get the best results from my equipment — and it’s very interesting to me.”

Seeing Minerals on the Moon

Paillou loves to take color-enhanced pictures of the moon that show the diversity of its blue titanium and orange iron-oxide minerals. And he delights in capturing star-rich pictures of the night sky. Both require significant real-time filters, best run on a GPU.

Around his Dijon home, as in many places, “the sky is really bad with light pollution from cities that make images blurry,” he said. “I can see 10-12 stars with my eyes, but with my system I can see thousands of stars,” he said.

“If you want to retrieve something beautiful, you need to apply real-time filtering with an A/V compensation system. I built my own system because I could not find anything I could buy that matched what I wanted,” Paillou said.

His first prototype mounted a ZWO ASI178MC camera using a Sony IMX178 color sensor on a platform with a gyro/compass and a two-axis mount controlled by stepper motors. Initially he used a Raspberry Pi 3 B+ to run Python programs that controlled the mount and camera.

The board lacked the muscle to drive the real-time filters. After some more experiments, he asked NVIDIA for help in his first post on the Jetson Nano community projects forum on June 21. By July 5, he had a Jetson Nano in hand and started loading OpenCV filters on it using Python.

By the end of July, he had taught himself PyCUDA and posted significant results with it. He released his routines on GitHub and reported he was ready to start taking pictures. 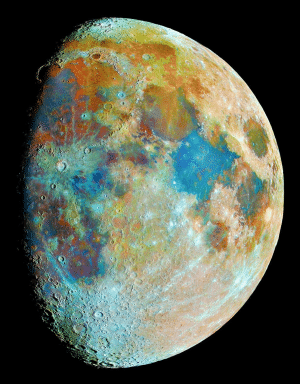 On Aug. 2, he posted his camera’s first digitally enhanced picture of the Copernicus crater on the moon as well as a YouTube video showing a Jetson Nano-enhanced night sky. By October, he posted stunning color-enhanced pictures of the moon (see above), impressive night-vision capabilities and a feature for tracking satellites.

Paillou’s project became the most popular thread on the NVIDIA Jetson Project’s forum with more than 3,100 views to date. Along the way, he gave a handful of others tips for their own AI projects, many of which are available here.

Exploring Horizons in Space and Software

“Twenty years ago, computers were not powerful enough to do this work, but today a little computer like the Jetson Nano makes it really interesting and it’s not expensive,” said Paillou, whose laptop connected to the system also uses an NVIDIA GPU.

In fact, the $99 Jetson Nano is currently marked down to $89 in a holiday special on NVIDIA’s website. Hobbyists who want to use Jetson Nano for neural networking can pair the starter kit with a free AI for Beginners course from our Deep Learning Institute.

Paillou sees plenty of headroom for his project. He hopes to rewrite his Python code in C++ for further performance speed-ups, get a better camera, and further study the possibilities for using AI.

With a little help from friends in America, the sky’s the limit.

“I was not sure I would have the time to learn CUDA – at 52, I am not so young – but it turned out to be very powerful and not so complicated,” he said.

Follow Paillou’s work and many others contributed by fellow developers on the Jetson Community Projects page.